A few weeks ago, Crif President Francis Kalifat stressed Zoom France on the growing phenomenon of Zoombombing. To strengthen the application security, Zoom let Crif know that a new tool was now available to report harmful unwanted users on the video-conferences. Update on May 12, 2020
Zoom France announced Crif that the latest Zoom update (available now) contains a new reporting tool.
Zoom users can now "report" any unwanted user and remove them from the meeting. This new version aims to strengthen security when using the application.
Crif welcomes this initiative and hopes that it will allow us to continue with video conferencing on Zoom with greater serenity.
How to report an unwanted user on Zoom?
Update on May 4, 2020
Friday, May 1, after a new Zoombombing reported by shocked internet users, Crif again questioned the Director of Zoom France.
Many users have indeed noted the intrusion of harmful individuals on the Zoom platform. Child pornography images and videos were broadcast during various video conferences, notably during a religious course given by the former Chief Rabbi of Israel to the French-speaking Jewish community.
Crif immediately contacted Loïc Rousseau, Director of Zoom France to alert him to this new extremely serious incident.
Loïc Rousseau reacted very quickly and thanked Crif for warning him. He strongly condemned this new act of Zoombombing and explained that recent features had been implemented to ensure the safety of users.
Crif remains in contact with Zoom France.
In addition, Crif would like to remind Zoom users that, on the Internet as in "non-virtual" life, holding events requires organizational and security measures. These measures are recalled in a dedicated document proposed by the SPCJ.
General background on the situtation - April 22, 2020
Facing the exceptional health situation, and in order to maintain social ties and facilitate daily professional exchanges, we had to turn to the use of technological tools. Among them, the Zoom platform has become the favorite platform for video conferences.
Indeed, since the beginning of the lockdown period, the number of Zoom users has multiplied by 20, going from 10 million users in December 2019 to 200 million users today.
Despite the various security updates carried out by Zoom since beginning of lockdown, flaws have been revealed. This week, in different parts of the world, dozens of commemoration ceremonies for Yom Hashoah (Day of Remembrance for the Victims of the Holocaust) were notably interrupted by antisemitic or child pornography content.
This Zoombombing phenomenon disrupts the smooth running of conferences held via the platform.
----------------------------------------
What is Zoombombing?
Zoombombing is the term that describes the intrusion of an uninvited - and potentially harmful - person during a video conference organized on the Zoom platform.
----------------------------------------
Considering these very serious facts, Crif President Francis Kalifat wrote to the Director of Zoom France, Loïc Rousseau, to invite him to seriously consider to set ut of a reporting tool as well as to reinforce and specify the rules for verifying and closing Zoom accounts that have been reported by users.
Francis Kalifat stressed that security, respect for the law, and benevolence must be guaranteed on Zoom as on all platforms. "It is your responsibility," he said. 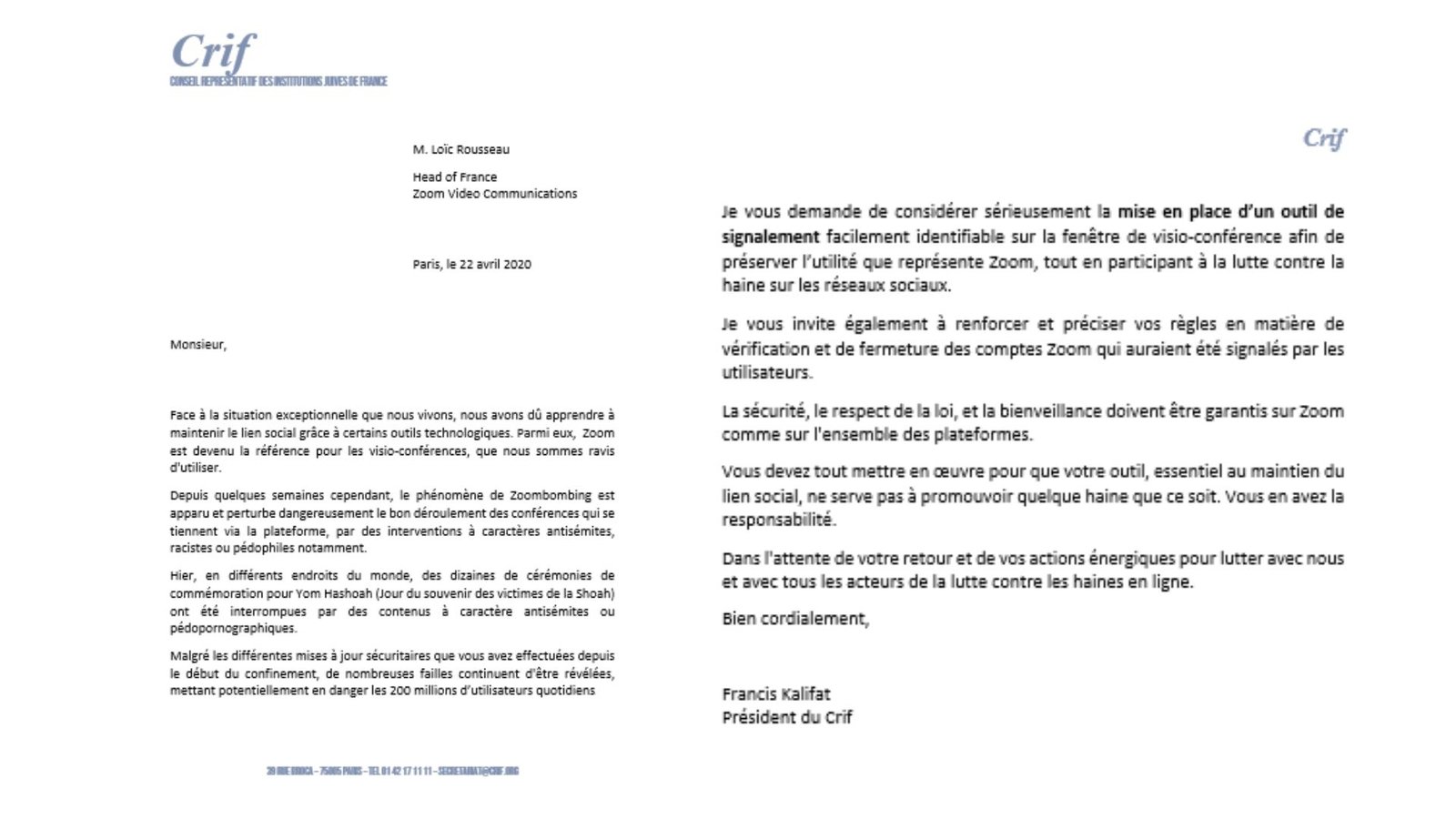 Crif President Francis Kalifat' letter to the Director of Zoom France
Yesterday afternoon, Zoom announced the implementation of a reporting tool on its platform. This tool will be available from an upcoming update on Sunday, April 26.
Each user will be able to report the profile of a harmful user on Zoom. Reports will be examined by the Zoom team dedicated to moderation and, if necessary, the profiles reported will be blocked and will no longer be able to use the Zoom platform.
Crif welcomes this new security update. A meeting (by Zoom) is planned with the Zoom France team to discuss online security and hate issues.
Sur le même thème