After two years of the pandemic, a Crif delegation traveled to Israel at the beginning of November 2021 for a week of meetings and official trips. During this week, the Crif delegation had the chance to meet with H.E. Ms. Yaël German, Ambassador-designate of Israel in France. As well as the President of the State of Israel, Itzhak Herzog, Yair Lapid, Deputy Prime Minister, Israeli Foreign Minister and Nachman Shay, Minister of Diaspora. It was during the last evening of the Executive Board’s mission to Israel that Francis Kalifat organized a dinner of which Mrs. Yaël German was the guest of honor.

Announced several weeks ago by Minister of Foreign Affairs Yair Lapid as Israeli Ambassador in France, Ms.Yaël German will arrive in Paris in a few weeks.

The dinner began with welcoming words by Francis Kalifat, who introduced the Crif and more generally the Jewish Community of France.

It was in the language of Molière that the ambassador responded by thanking Francis Kalifat for his invitation and the warmth of his welcome.

The members of the delegation then introduced themselves by specifying their role within the organization by presenting the associations of which they are members, thus giving the Ambassador a broader vision of the challenges that await her in France, but also the warm welcome of the Jewish community for that which will soon represent the state of Israel in France.

The discussion then proceeded in a more personal tone, with the ambassador telling the members of the delegation about her political career and also giving elements about her personal and family life.

Everyone left wishing "see you soon in Paris".

A formal evening, but very friendly to close an exciting, intense, and pleasant trip. 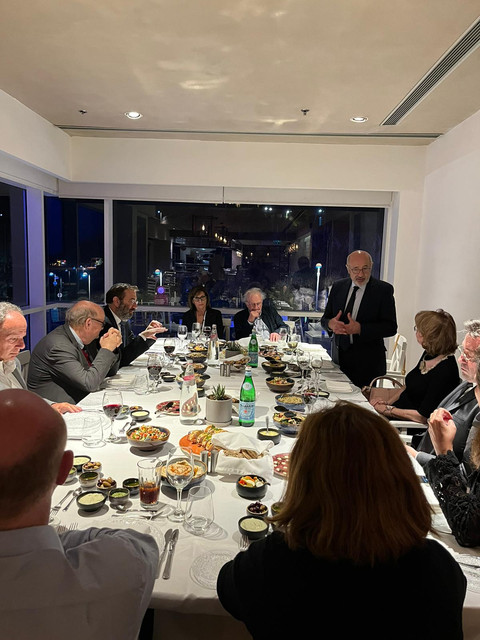