Published on October 27, in CNN

Calls are growing in parts of the Muslim world to boycott French goods in protest after President Emmanuel Macron publicly defended cartoons of the Prophet Mohammed, which are considered blasphemous in Islam.

Emmanuel Macron made the remarks last week at a tribute to the murdered high school teacher Samuel Paty, who was beheaded earlier this month during a terror attack in a northern suburb of Paris.

Samuel Paty was killed after he showed cartoons of the prophet during a class on freedom of expression.

Emmanuel Macron said that France would not "give up" the caricatures and pledged to tackle extreme Islamism in the country, sparking demonstrations and triggering boycotts in Muslim-majority countries.

"I am calling on the people, do not go near French goods, do not buy them," Turkish President Recep Tayyip Erdogan said Monday during a speech in the capital Ankara. "European leaders must say 'stop' to Macron and his campaign of hatred." 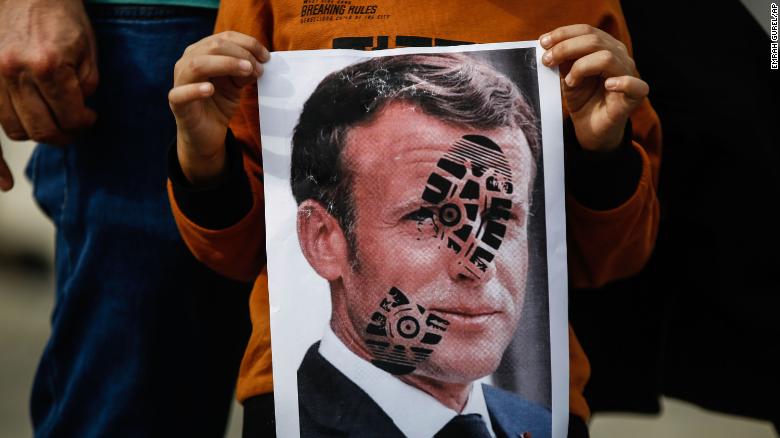 A child holds a photograph of Emmanuel Macron, stamped with a shoe mark, during a protest against France in Istanbul on October 25

In Kuwait, a non-governmental chain of hypermarkets said that over 50 of its outlets planned to boycott French products. A boycott campaign is also underway in Jordan, where some grocery shops hung signs declaring that they were not selling French goods.

A range of stores in Qatar are doing the same, including supermarket chain Al Meera, which has more than 50 branches in the Arab country. Qatar University also said that it was postponing its French Cultural Week indefinitely.

On Tuesday Saudi Arabia condemned the publication of "offensive" cartoons of the Prophet Mohammed but stopped short of calling for action against France. Riyadh also condemned terrorist acts, in a reference to Samuel Paty's death.

Samuel Paty's murder has reignited tensions surrounding secularism, Islamism and Islamophobia in France, but public anger in Islamic countries over the Macron's handling of the attack threatens to make it a diplomatic and economic issue too.

Amid the backlash, the French embassy in Ankara advised French citizens in Turkey on Monday to exercise caution and avoid public gatherings.

In a controversal speech in early October, before Samuel Paty's murder, Emmanuel Macron vowed to fight "Islamist separatism" with a new law that will "reinforce secularism" in France.

"There is in this radical Islamism, a methodical organization to contravene the laws of the Republic and create a parallel order, to erect other values," Emmanuel Macron said during the speech.

The French leader also declared that Islam was a religion "in crisis all over the world," according to BFM TV.

In a statement issued on Sunday, France's foreign ministry called the latest boycotts of its products "unjustified," and demanded that they "end immediately."

The ministry said the reaction distorted the President's remarks for political aims, and that "the positions defended by France [were] in favor of freedom of conscience, freedom of expression, freedom of religion and the refusal of any call to hatred."

The statement added that Emmanuel Macron's policies were aimed at "fighting against radical Islamism, and to do so with the Muslims of France, who are an integral part of French society, history and the Republic."

"We will not give in, ever," Emmanuel Macron tweeted on Sunday. "We respect all differences in a spirit of peace. We do not accept hate speech and defend reasonable debate. We will always be on the side of human dignity and universal values."

Samuel Paty's death has sparked a security crackdown in France, where officials are targeting hate speech on social media and organizations and non-profits with possible links to Islamism.

The Mohammed caricatures that Samuel Paty used in his class originally appeared in Charlie Hebdo, and were cited as the motivation for a terror attack on the satirical magazine in 2015 that left 12 people dead. Macron fiercely defended the right to display such cartoons in France at the memorial event for Paty.

France will keep "loving debates, reasonable arguments, we will love science and its controversies," the French leader said. "We will not give up caricatures, drawings, even if others are retreating." 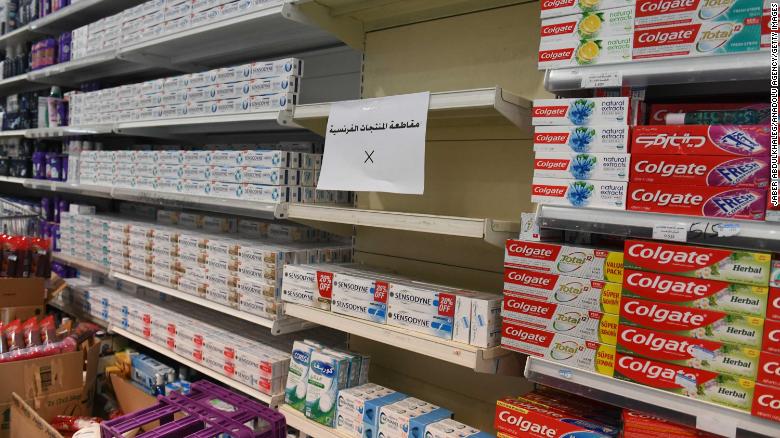 A sign is placed on partially empty shelves at a market, boycotting French goods in Kuwait City, Kuwait on October 24

Jordan, Pakistan, Egypt and Iran are among the Islamic countries to condemn France for the publication of the caricatures, and Macron's response.

But fellow European leaders spoke out in support of Macron, including German Chancellor Angela Merkel, whose spokesperson swiftly condemned Erdogan's comments on Monday.