Last week, Crif President Francis Kalifat wrote to French President Emmanuel Macron regarding the postponement of the vote for the adoption of IHRA's definition of antisemitism.

The vote for the adoption by France of the IHRA definition of antisemitism was to take place on May 29 into the French Parliament. It had been postponed, without any mention of a new date.
In a letter addressed last week to President Emmanuel Macron, Crif President Francis Kalifat reminds him of the commitment made during Crif Dinner, on February 2019. Emmanuel Macron had indeed announced the adoption by France of the IHRA definition of antisemitism.
Francis Kalifat stressed that a motion for a resolution had been tabled by the antisemitism study group of the Parliament, led by the deputy Sylvain Maillard. "Unfortunately, the examination of this motion for a resolution, signed by 167 deputies and noted on the agenda for May 29th, has been postponed indefinitely," he said afterwards.
In a context in which antisemitism and anti-Zionism know no limits, Crif President said it seemed "of the utmost necessity that this motion for a resolution be examined and put to the vote very soon." Francis Kalifat asked President Emmanuel Macron that this text be examined by the Parliament before the summer parliamentary recess. 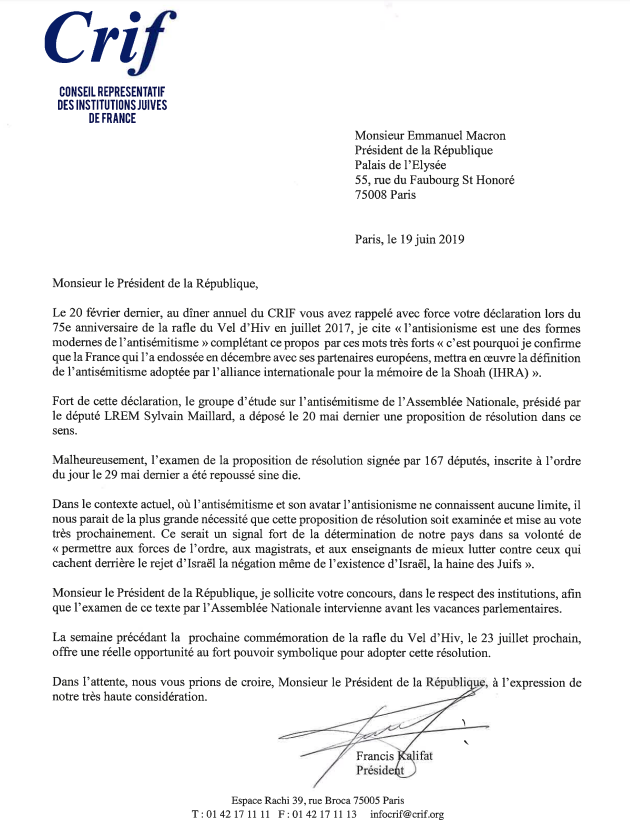