Last week, Columbia University (New York) hosted its Global Leaders Forum. Among the speakers was Malaysian Prime Minister Mahathir Bin Mohamad, sadly well known for his antisemitic statements. During his speech, Romy Ronen, a member of the Columbia student organization Students Supporting Israel (SSI) called him out and asked him to clarify his position. We have asked SSI to tell us more about their brave move. Sudents Supporting Israel - Dr. Mahathir Bin Mohamad has stated that he is “proud to labeled antisemitic” in his own blog post. He has said, in a BBC interview that he “cannot even mention that in the Holocaust it was not six million (Jews who died).” In his autobiography, A Doctor in the House, he claims that “Jews are not merely hook-nosed, but understand money instinctively.” In 1997, Mohamad gave a speech claiming that the failure of the Malaysian ringgit was due to a “Jewish agenda” led by Holocaust survivor and philanthropist George Soros.

What was the purpose of his visit at Columbia University?

The event was linked to the Global Leaders Forum, where leaders from around the world were brought in to speak to Columbia students, such as the Queen of Belgium. The SSI member asked him to clarify his position toward the Holocaust.

What did he respond after you called him out during the talk and how do you feel about it?

This was his response: I’m exercising my right to free speech. Why is it that I can’t say something against the Jews while other people may say things about me, about Malaysia, and I didn’t protest. I didn’t demonstrate. You have to be willing to listen to views which are uncomfortable because of free speech. Free speech is about free speech. When you say no, and you cannot say this, then there is no more free speech. You must remember what free speech does. You must remember that one English man was banned for three months for disputing the numbers of the Holocaust. While I have not disputed them, but I can say I don’t know who came up with these numbers. If this is somebody who is in favor, you get one figure, somebody who is against, you get another picture. So I accept that there was a Holocaust, that there were many Jews killed. And, in fact, one time I was very sympathetic towards them during the war when you were not around, but I was around at that time.

The student cut him off at this point and stated: My grandmother was, in the Holocaust, so she was around. He then said he had “seen enough.” His response legitimized his belief that it is okay and just to be antisemitic, owing to the rights of free speech. In this form, Jewish students inevitably feel unsafe to be around such a hostile environnement, one that excuses antisemitic tropes.

Did Columbia University got in touch with SSI in order to explain why Mahathir Bin Mohamad was invited in the first place and maybe apologize afterwards? 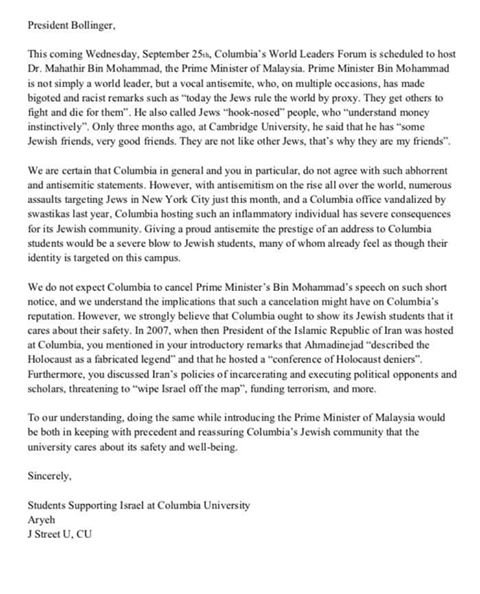