On Thursday, June 11, the European Court of Human Rights (ECHR) condemned France in a case of calls to boycott Israeli products. In this case, activists were convicted for inciting economic discrimination against people because of their nationality. This ECHR decision contradicts the case law of the Court of Cassation. Crif regrets this decision. Crif takes note of today's decision, which equates the boycott of Israel to a demonstration of political opinion protected by Freedom of expression.

Crif notes with regret that the Court by its judgment of June 11, 2020 contradicts its judgment of July 16, 2009 by which it recognized the "discriminatory and therefore condemnable" character of the call for the Boycott of Israel, the two judgments relying on the same article 10 of the European Convention on Human Rights.

Crif recalls that to date the call for a boycott of Israel is considered illegal in France and that this illegality has been sanctioned by the Court of Cassation following settled case law.

Francis Kalifat, President of Crif, who has often warned of the link between hatred of Israel, antiZionism, anti-Semitism and hatred of the Jews "is worried that the Strasbourg court decision will entice a significant increase in hate speech and acts against French Jews ... ” 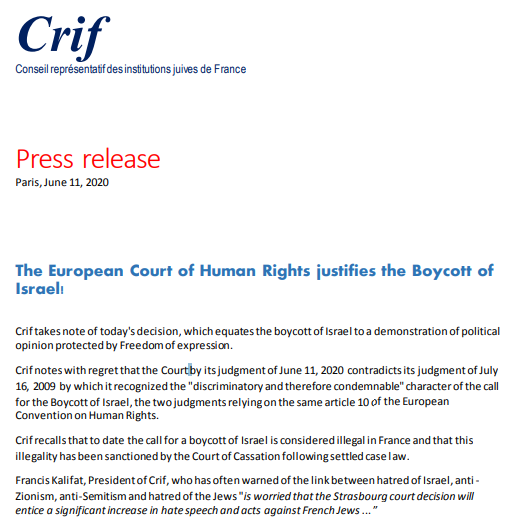