Under the guise of protecting the rights of Palestinians, Palestinian NGOs promote BDS, antinormalization, and “right of return,” which effectively would mean the end of a Jewish state. They reject the legitimacy of Israel’s existence and deny it the right to self-defense.

Photo : Delegation with Jerusalem Governor for Palestinians in France on October 2018

On July 10, 2019, the “launch of a French-Palestinian decentralised cooperation project for the youth in East-Jerusalem” took place in the presence of the Consul General of France in Jerusalem “with the participation of fifteen French local representatives, who came to meet the coordinators of Al Bustan center.” During this event, the Consul General of France “stated that the support of the French Ministry of Europe and Foreign Affairs to the project aims at preserving the prospects for peace by helping Palestinians to live in dignity in Jerusalem, until the city becomes the capital of the two States.”

The individual originally listed as the contact person for the program was Daoud Ghoul, who, in 2015, was convicted of membership in the PFLP terrorist organization.

Update: Following the initial publication of this report on July 7, 2019, Israeli media covered our research and the Israeli Ministry of Foreign Affairs and a number of Jerusalem City Council members issued official protests. Within two weeks, the French government website removed its reference to convicted PFLP member David Ghoul. Also, Al Bustan Center, the French government’s local partner, removed most of the problematic Facebook content mentioned in this report.

On March 6, 2019, Qaraein published a memorial post for Basel al-A’araj, a Palestinian killed in a 2017 firefight with Israeli security forces. Al-A’araj was arrested by the Palestinian Authority in April 2016 “for planning attacks against Israelis and imprisoned for six months.” According to Israeli officials, he “was allegedly part of a terrorist cell planning to carry out attacks on Israeli targets,” and “directed the cell and was responsible for purchasing the weaponry.” The Popular Front for the Liberation of Palestine (PFLP) terror organization describes him as “one of the most prominent young Palestinian strugglers.” 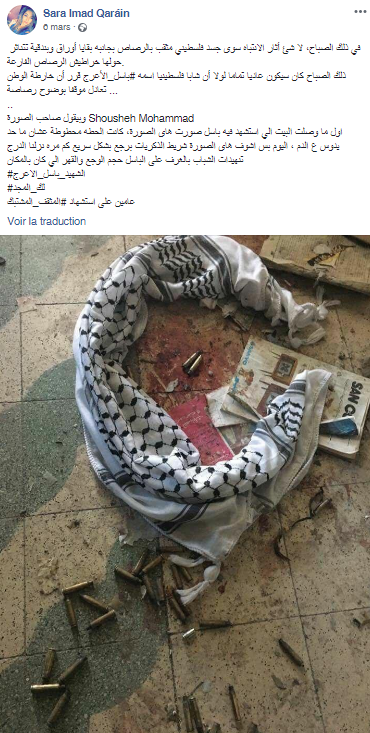 The 2019-2021 project “towards the youth of East Jerusalem” was initiated by the “Decentralized cooperation network for Palestine”1 (Le réseau de coopération décentralisée pour la Palestine; RCDP), a French association that “intends to coordinate and support French local authorities wishing to establish or maintain cooperation with local Palestinian authorities,” “in partnership with the Consulate General of France [in Jerusalem] and the support of [the French Ministry of Europe and Foreign Affairs] MEAE.” The local project partner is the Al Bustan Center, “a socio-cultural center.”

Daoud Ghoul, who is referred to as an Al Bustan cultural center founder, serves as the official project contact and is described as a “member of the administrative council and treasurer.” Another official document describes him as Al Bustan’s project supervisor while in the same document stating that Ghoul is not employed by the organization.

In 2015, Ghoul was convicted for his membership in the Popular Front for the Liberation of Palestine (PFLP), a terrorist organization designated as such by the EU, the US, Canada, and Israel. Following his conviction, Ghoul was sentenced to 18-months imprisonment.

“The appellant has two criminal convictions in his past for membership in a terrorist organization in 2005 and 2006, and for ideologically motivated violent crimes, for which he was sentenced to significant jail sentences of 12 and 18 months.  Nevertheless, this was not sufficient to deter him and he returned to commit offences in the years following his release” (emphasis added).

On November 27, 2016, Al Bustan cultural center published a Facebook post (which has since been removed by Al Bustan after the publication of this report) marking Ghoul’s release from Israeli prison. The post referred to his arrest and explained that Ghoul “was convicted by the Israeli Occupation Court of membership in the Popular Front for the Liberation of Palestine.” 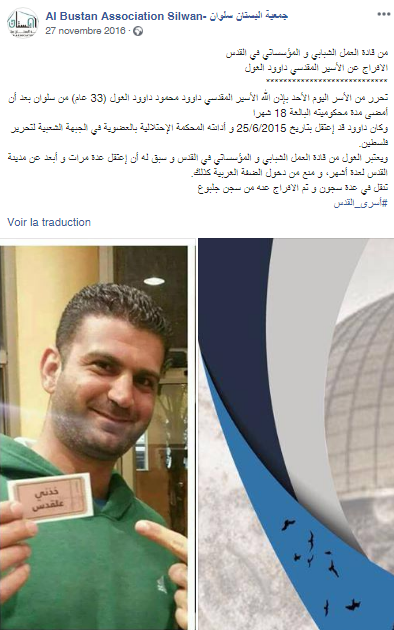 In November 2017, RCDP organized “The Night of the Friends of Palestine” event in partnership with several groups, including “the Palestine Embassy in Paris, UNESCO, the United Nations Committee of the Inalienable Rights of the Palestinian People, the [French] Ministry of Europe and French Foreign Affairs and the French Consul of Jerusalem.” The event, attended by several French regional and local authorities, served as a fundraiser for a “project for the youth of East Jerusalem.” Subsequently, in December 2017, “following the proposal of the Consulate General of France in Jerusalem, RCDP general assembly…and its local authority members decided to work with Al Bustan Center, a socio-cultural center for youth and located in an area particularly affected by evictions and demolitions.”

The partnership description explains that “while the youth of East Jerusalem suffers from psychological pressure, the Al Bustan socio cultural center appears as an alternative to its confinement. Founded by young people in the Silwan neighborhood, which is heavily affected by the demolitions, this center offers psychological support, cultural activities, sports, etc to some 500 children. In the face of this situation, the city of Gennevilliers, with the support of the RCDP and French local authorities decided to set up a project to support this center, by training young people in sport, culture, social health and citizenship.”

A 2017 RCDP report noted that revenue from “The Night of the Friends of Palestine” dinner was €59,730, including €28,000 from “DAECT [Delegation for the External Action of Local Government] and the Palestine embassy [in France]” (emphasis added).

In October 2018, a mission of RCDP and French local government representatives met in Jerusalem with “friends of Al Bustan” and the Palestinian Authority governor of Jerusalem in order to “clarify the project outlines.”

On July 25, 2018, Al Busan published on Facebook pictures of a youth camp ceremony, in which young Palestinians wore flags on their T-shirts to represent various countries. The teenagers representing Israel and the United States brandished guns and proceeded to conduct a mock execution of “Palestine.”  (The pictures were deleted after the publication of this report.) 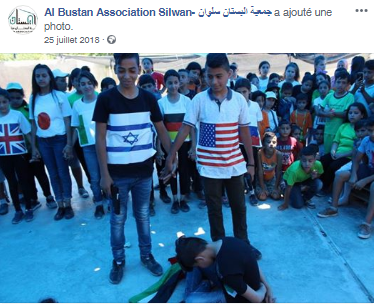 In a 2017 article published on her blog, Qaraein explains that “for the fifth year in a row, the Al Bustan Society in the town of Silwan held a week of steadfast activities,” including visits to “a group of the prisoners’ families, who were sentenced for a long term in order to support them.”

Al Bustan’s Facebook account features multiple posts that glorify violence and members of terrorist organizations. For instance, in 2015, the organization published a video clip of a terror attack in which a Palestinian terrorist “rammed into pedestrians, got out of the car with a knife in hand, and began stabbing passersby.” Al Bustan refers to the terrorist as a “martyr,” described the terror attack as an “operation,” and using the Hashtag “Intifada started” (emphasis added).

Several local French government bodies, which have been involved in anti-Israel activities, are partnering with Al Bustan on this project. For example: 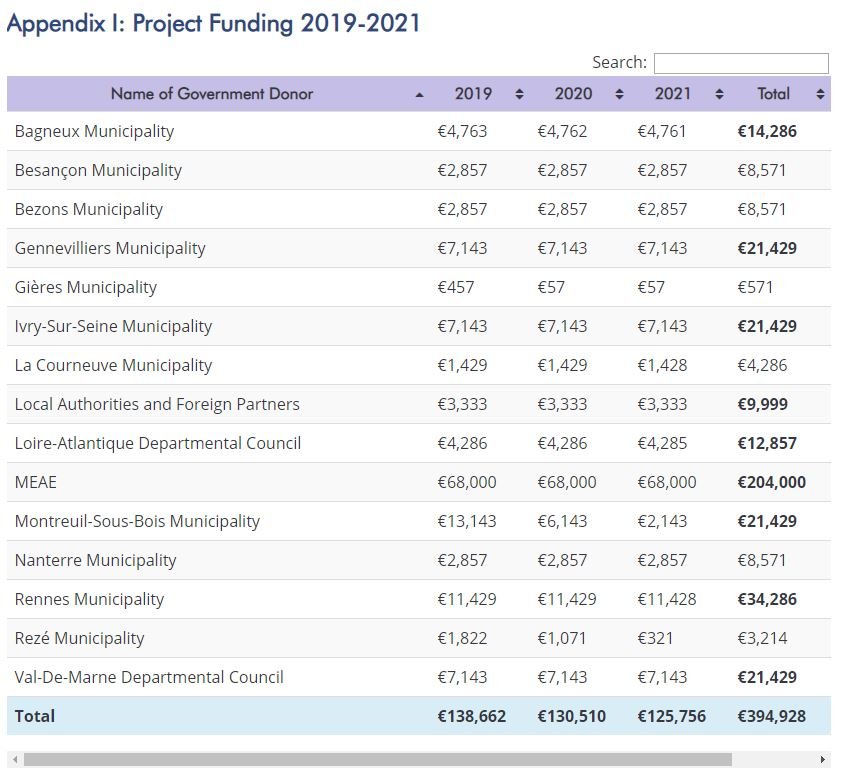